One of our members, Jair López, was awarded at the 8th COITT Awards Edition 2019, for his BsC thesis titled "Design, implementation and evaluation of a web-based player for omnidirectional content, by following the standard HbbTV v2.0.1 specifications". Link to the new at the UPV website (in Spanish). 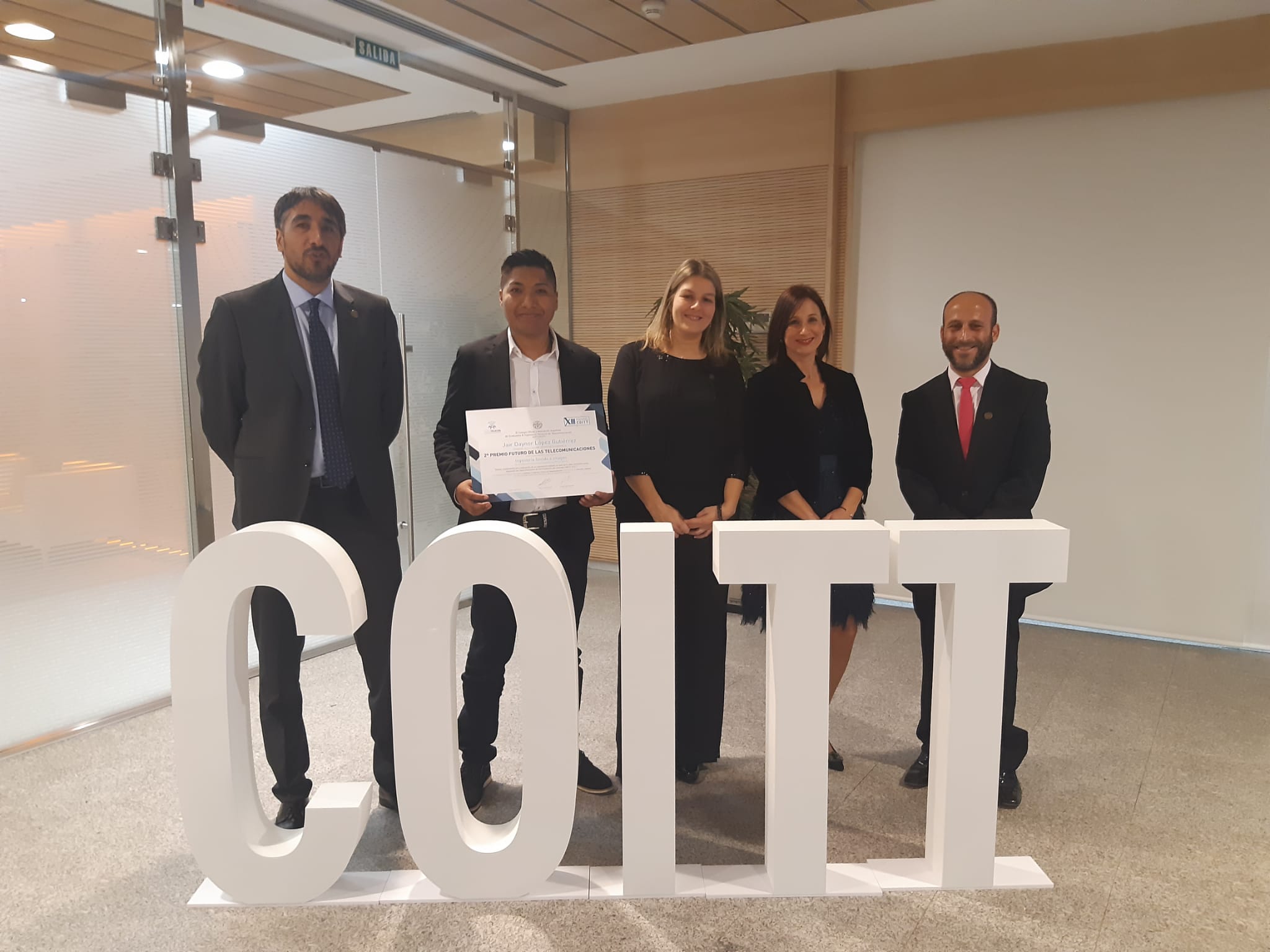 The system is especially useful for children, as an early diagnosis is crucial for the success of the possible treatment. Stereopsis Research staff of Valencia’s Polytechnic University (UPV) belonging to the Gandia campus, and FISABIO (Foundation for the Promotion of Health and Biomedical Research in the Valencian Community) have developed an innovative system to diagnose alterations to stereoscopic vision. The system, patented by both institutions, is especially useful for children, as an early diagnosis is crucial for the success of the possible treatment. To date, it has been tested on 40 patients. Stereopsis is what allows us to see an item in three dimensions, and therefore, allows us to estimate the size of the item and how far away it is. According to doctor Carmela Porcar, ophthalmologist at the Hospital Virgen de los Lirios of Alcoy and researcher of the project, this ability starts developing at birth, and is established at seven years of age; therefore, the optimal treatment has to be before said age. Because of this, a key objective of the project was to allow an early diagnosis of alterations to stereopsis. In this sense, the software has been developed with shapes and figures that are appealing to small children, as well as being an intuitive application, and therefore, easy to use, explains Fernando Boronat, researcher from the Gandia campus of the UPV and head of the UPV team that has taken part in the project. When there is a sudden loss of vision, or when there is strabismus or a lazy eye, alterations of stereopsis can appear, a doctor Ezequiel Campos explains, head of the Ophthalmology Department of the Hospital Virgen de los Lirios and head of the FISABIO team that took part in the project. Around 5% of the world’s population has problems to merge images, generally derived from amblyopia (commonly known as lazy eye) or strabismus. Therefore, an early diagnosis is key to be able to reverse these causes and rehabilitate the eye in advance.

The designed platform offers a system to measure the perception of depth of vision of patients thanks to artificial vision techniques. It is composed of 3D glasses and a monitor, or heightened reality glasses, an artificial vision system that works with a processor, cameras and a device for the patient to rest their chin. The system has improved accuracy compared to conventional tests (Titmus, TNO, Randot Stereotest and Lang Stereotest) and decreases the number of false positives and negatives, which are very high in these tests, according to the research team. It makes it possible to estimate the perception of depth in millimetres, with an accuracy greater than 400-800 seconds of arc; it avoids the issue of the learning effect that appears with set answers and, by not being based on outlines, it prevents monocular clues (which can be achieved with a single eye), making it more reliable. The platform also detects the level of stereopsis and makes it possible to monitor the quantitative evolution during the treatment period. The gathering and storage of the patient’s data is conducted automatically. The system is registered in the Patent Pool of the Valencian Community. In 2020, the UPV and FISABIO team will work on developing a more compact unit that can be installed in practices, as part of the POLISABIO innovation programme Project. 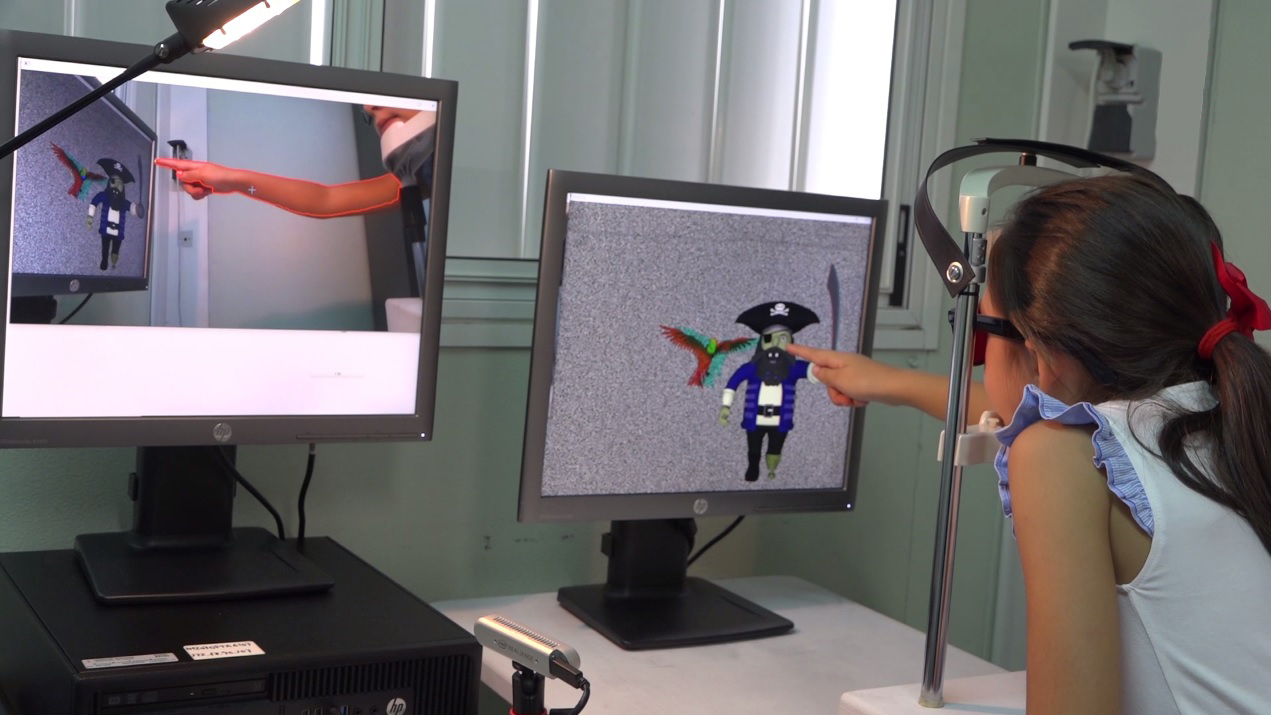 This book is a unique reference and perfect companion book about that research area. It provides a comprehensive overview from complementary perspectives, such as theoretical foundations, available technologies, use cases, standardization efforts and experimental studies.

In summary: over 60 authors, 23 chapters, 679 pages, 241 illustrations (193 in color), a foreword by Ralf Steinmetz and an afterword by Dick Bulterman.

Members of the group have attended the 2018 edition of the ForoE event at Gandia Campus of Universitat Politècnica de València, on April 25. Over 30 companies and Gandia Campus research groups have presented their products and developments in this successful event.
Clara Luzón presented our recent developments. 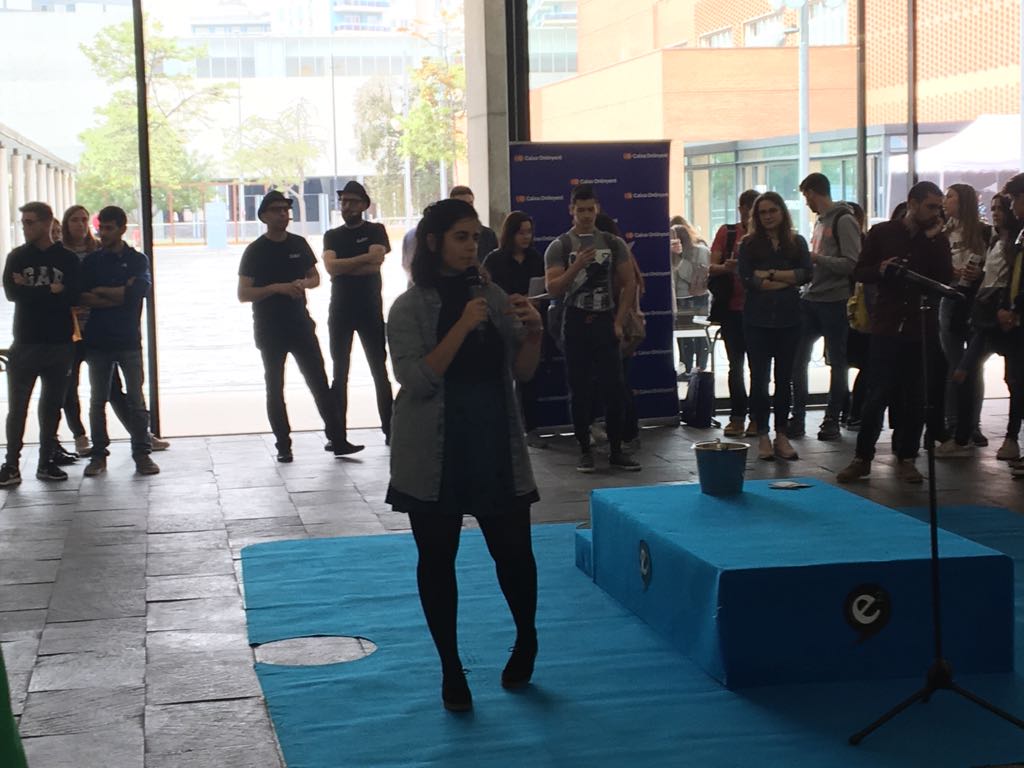 Fernando Boronat, leader of the group, presented the latest improvements and contributions of the research group at Jornadas Explora I+D+i, an event organized by Universitat Politècnica de València, Campus de Gandia. You can watch his presentation in the next video.

Fernando Boronat, has been interviewed by the autonomical public radio À Punt. He has talked about the future multi-sensorial TV and the next generation mulsemedia content. The interview is available in the next audio track, extracted from here.

Two of our members, Clara Luzón and Dani Marfil, were awarded at Concurso Emprendedor Universitario UPV 2017, STARTUPV 2K17 Competition, for the innovative and entrepreneur aspects of their BsC and MsC theses, respectively. Link to the new at the UPV website (in Spanish). 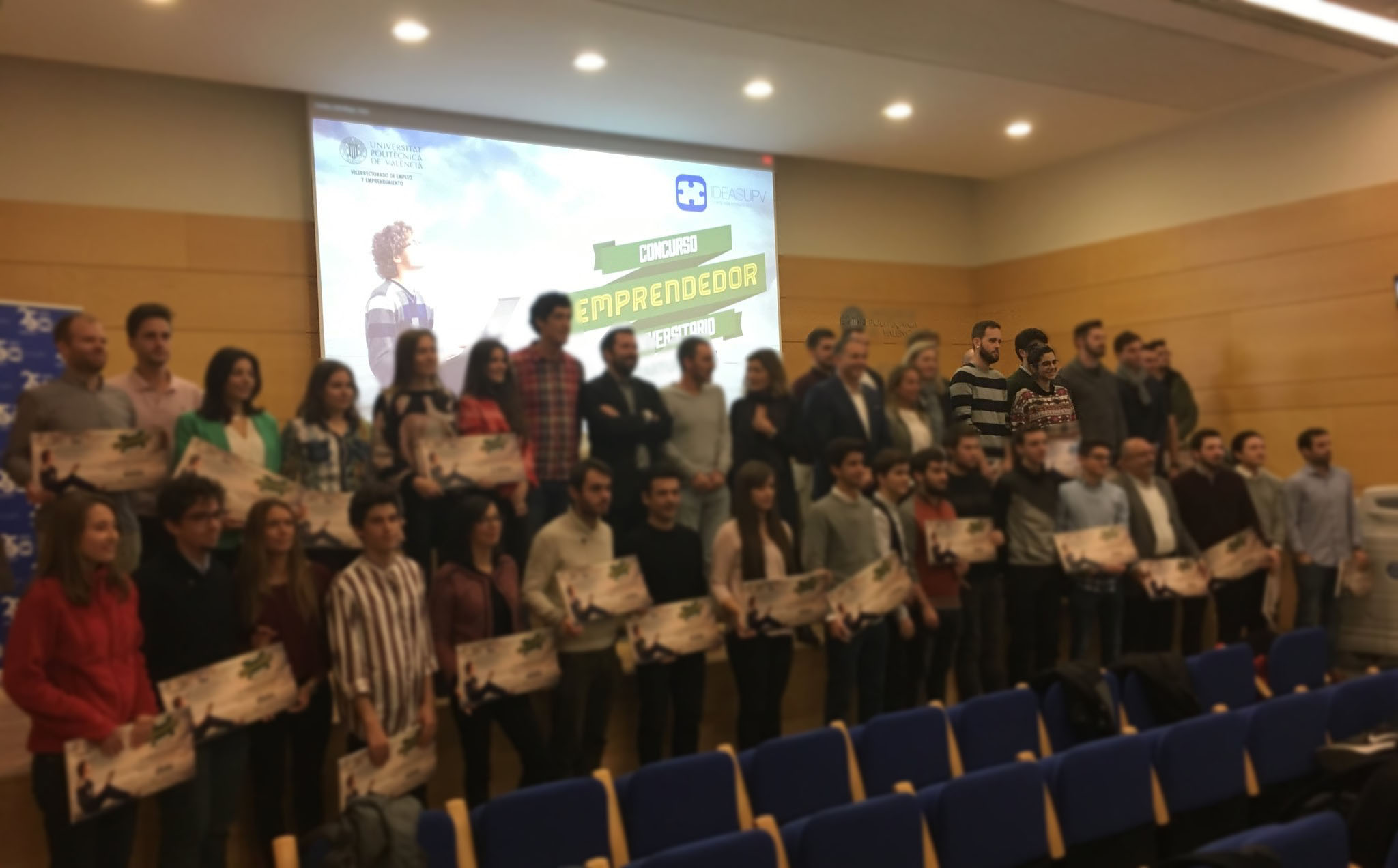 David Soler, one of our student members, has been awarded as “Best Bachelor Student 2017” for her excellent academic records, the potential of his BsC Thesis, and his promising contributions, by the “Colegio Oficial de Ingenieros Técnicos de Telecomunicaciones”.

The award was delivered in the opening act of the 2017/18 UPV academic course, celebrated in Gandia Campus. 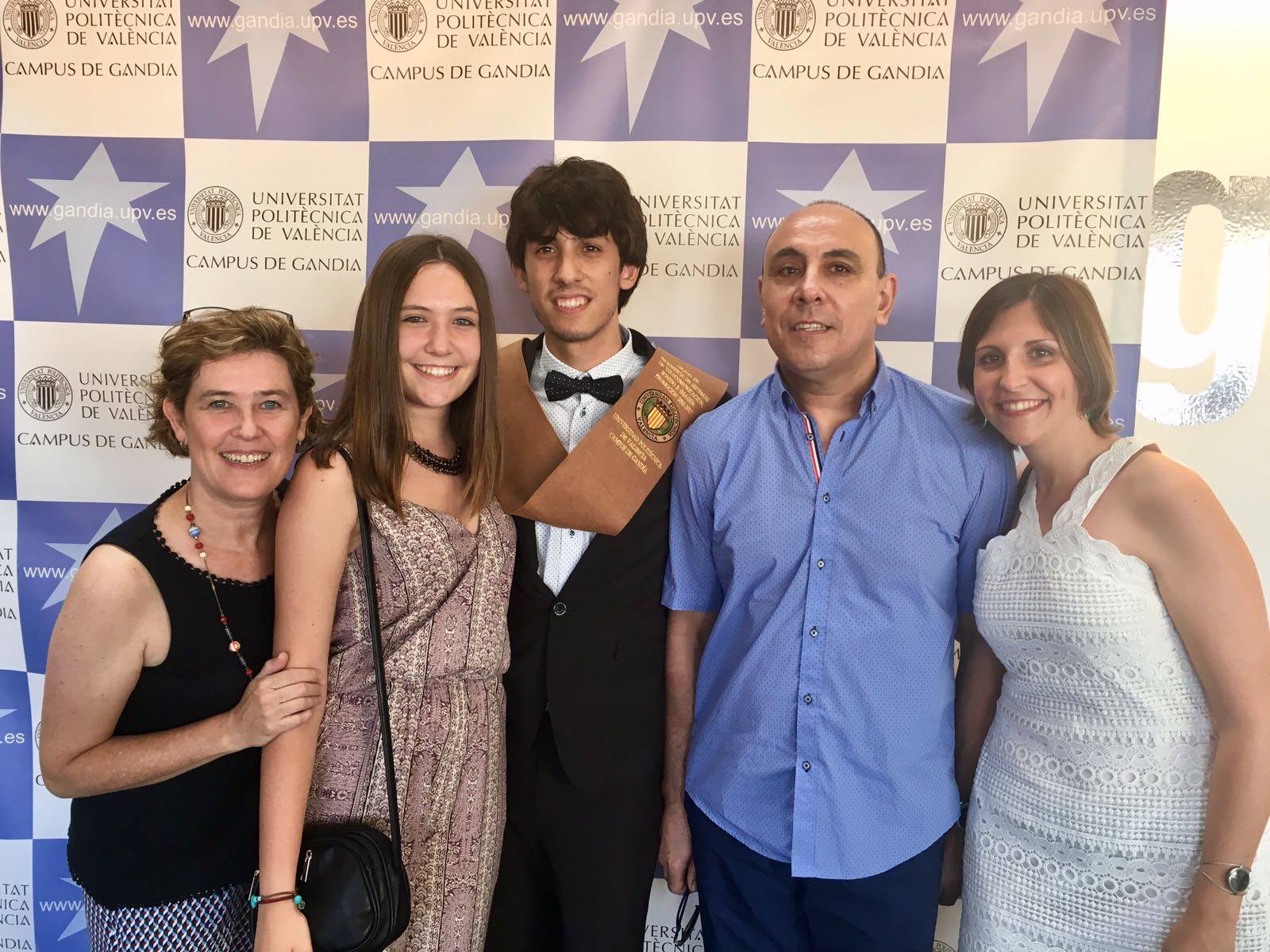 The Evaluators Commission of the Cátedra of Telefónica at the UPV has awarded IIM with a 2k€ grant for its project: WerSync: A Web Tool for Social Interaction and Civic Collaboration.

The main goal of this grant is to assist the development of technological demonstrations from UPV researchers under the matter of Social Innovation and IoT Technologies.

We are very pleased to receive this award, as it will allow us to improve and enhace our Social Platform: WerSync, deepening its integration with IoT Services and Technologies.

Overall, it was a very interesting event, in which we met new colleagues, experienced rich interactions, and our contributions attracted the interest of the attendees.

Clara Luzón and Dani Marfil have been interviewed for their work in Catedra IVIO UPV, which is done in the Gandia Campus of the Polytechnic University of Valencia, and is focused in odontology research and innovation.

They have talked about the research lines and contributions of Catedra IVIO UPV and about future possibilities of emerging technologies we are currently researching on, such as Virtual Reality.

Clara Luzón has been awarded as “Outstanding Junior Engineer 2016” for her excellent academic records, the potential of her BsC Thesis, and her promising research contributions, by the “Official College and Association of Graduates in Telecommunications Engineering of the Valencian Community”, iTelecos.

The award was delivered in the yearly gala dinner of iTelecos, in which other graduate students of our Campus received a professional qualifying diploma from this entity. 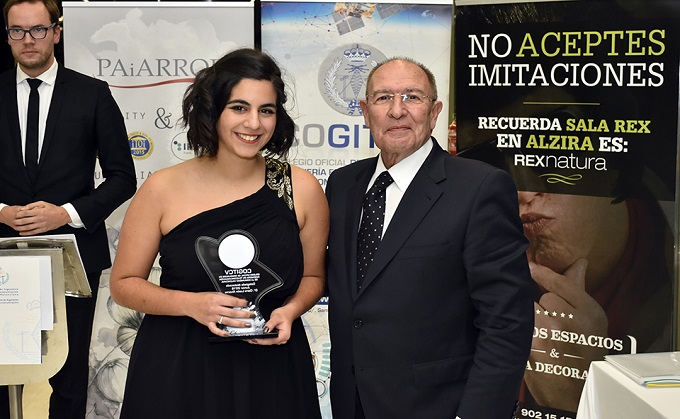 Fernando Boronat has participated in the "Ciència Propera" radio program, which is produced by the Gandia Campus of the Polytechnic University of Valencia, and is focused on science dissemination.

He has talked about the research lines and contributions of our group and about future possibilities of emerging technologies we are currently researching on, such as Virtual Reality and Multi-Sensorial Multimedia (Mulsemedia) systems.

The program is broadcast on Radio Gandia SER (every Monday around 12:30h) and on UPV Radio (every Monday at 16:00h). It is also available on iVoox and on iTunes. If you are interested, below you can find the interview on iVoox.

We had a stand to exhibit some of our demos and introduce our group (e.g., researchers, labs, equipment, contributions, interests...), together with other groups of UPV researching on the Creative Industries area.

We also got an accepted paper, entitled “Towards Immersive and Personalized Media Experiences: An HbbTV-compliant platform to Enable Hybrid and Multi-Device TV Scenarios”, and presented it at the “Interactive and Immersive Media Experiences” session.

Overall, it was a very interesting event, in which we met new colleagues, experienced rich interactions, and our contributions attracted the interest of the attendees. 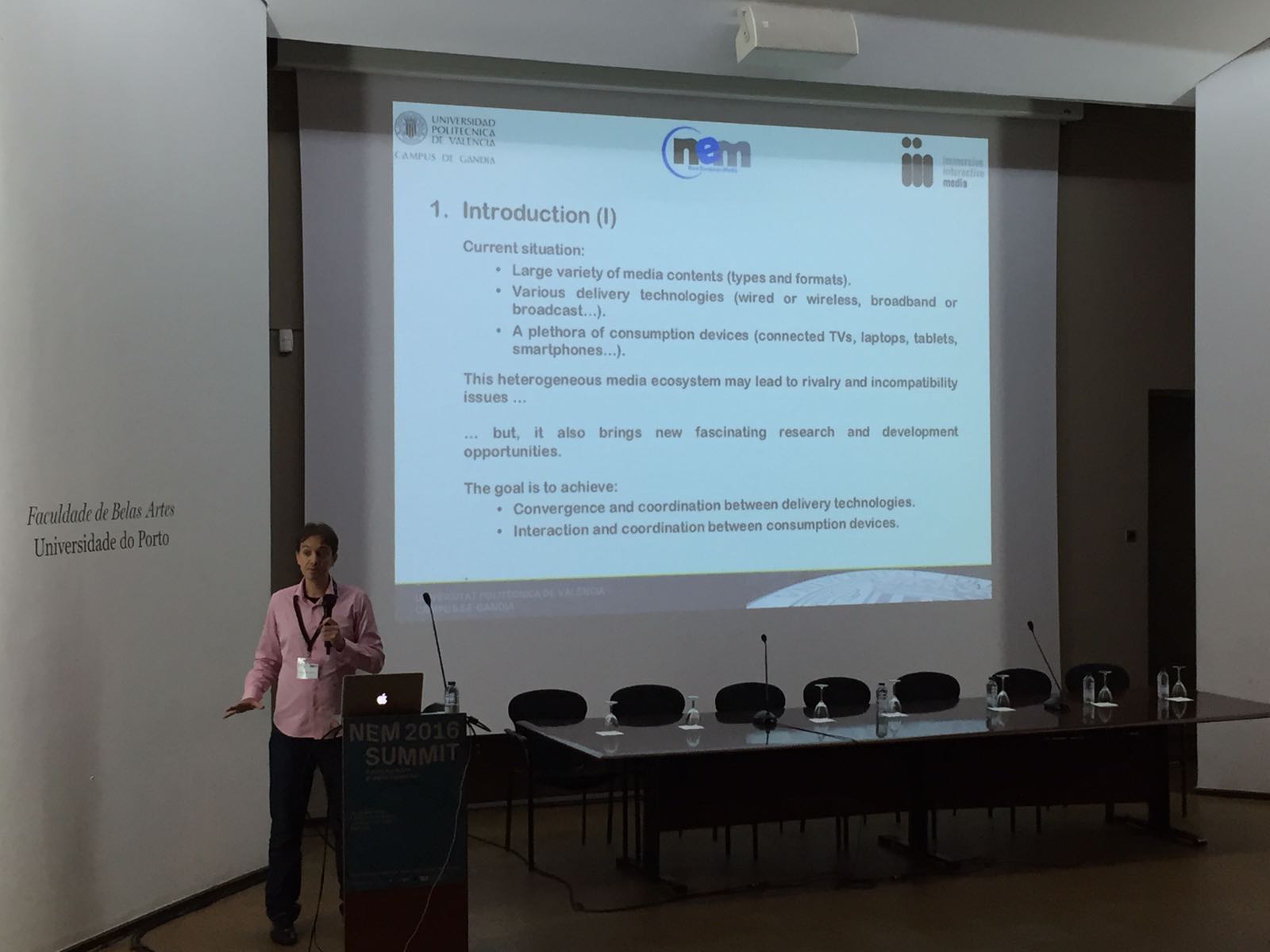 Our student Clara Luzón has been twice awarded as the Best Bachelor Student Award for her excellent academic records while coursing the "Bachelor’s Degree in Telecommunications Systems, Sound and Image Engineering" at the Gandia Campus of UPV. One of the awards was sponsored by the “Official College and Association of Graduates in Telecommunications Engineering of the Valencian Community”, and deliverd by the Chairman of its Board, Javier Marqués.

This course, Clara is enrolled in an MsC degree about Artificial Intelligence at UPV.

Fernando Boronat and Mario Montagud attended the PhD hooding ceremony at UPV, in which Mario was awarded with the 2016 Extraordinary PhD Thesis Award in the area of Information and Communications Technology (ICT), by the Polytechnic University of Valencia (UPV), receiving a diploma from the UPV dean.

Comarcal TV, a regional TV channel, has visited and interviewed us. We have shown our facilities and some of our prototypes, and Mario Montagud has talked about his PhD thesis award.

Special Session on MediaSync at MMSYS (May 2016)

Fernando Boronat and Mario Montagud have been co-organizers of the Special Session on MediaSync at ACM MMSYS 2016, the leading conference on Multimedia Systems, held in Klagenfurt (Austria).

The goal of the Special Session has been to address the latest advances and remaining challenges on media synchronization to accommodate emerging forms of immersive, personalized and ultra-realistic media experiences in our multi-sensory, multi-protocol and multi-device world. The purpose has been to provide a forum for researchers to share and discuss recent contributions in this field and to pave the way to the future, by focusing on different aspects of multimedia systems, such as content types, (multi-)processing techniques, networking issues, adaptive delivery and presentation, and human perception (QoE).

For this Special Session, we received 6 submissions, each of them being thoroughly reviewed by at least 3 experts. After the review process and internal discussions, 2 papers were selected for publication and presentation at ACM MMSys (33.3% acceptance rate). Those papers covered two key issues of media synchronization: 1) media synchronization and sequencing in web-based scenarios; and 2) time synchronization in distributed and wireless applications.

Mario Montagud has chaired the session, with around 30 attendees, who experienced rich interactions and discussed about new research ideas.

This special session has been the continuation of the MediaSync Workshop series (2012, 2013 and 2015) and of Special Sessions in other venues (QoMEX 2014).